Too many metaphors and too little time ;)! Those of you who have taken classes with Rick Sammon know that he’s a font of photographic knowledge and a great resource for tips and tricks. One of my favorite is “ see the light”, it’s so fundamental and key to making great pictures, but I’d like to add to it with a “heads up”. My daughter grabs me and say’s “have you seen the sky?” I go outside on my porch and look up and there’s a storm a brewing….took this quick shot of the church tower across the street with the stormy sky. 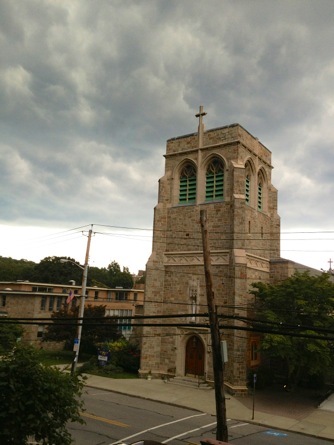 I then hopped in the car and went down to the Hudson river for a much wider view. The light was cool and the scene very much stormy which was perfect.

But the next interesting photo opportunity to incorporate Rick’s “see the light” and my “heads up” occurred at a Demi Lovato concert I took my daughter and her friend to the concert in Philly, Pa. I dreaded it! But it turned out much better then I thought, Demi was quite good. 20,000 screaming teenage girls stood the whole 2 hours Demi was on stage. So…..from my seat when sitting down I noticed how great the lights were and then loved how the girls in front of me were being silhouetted by the stage lights.

I just knew if I waited and watched both the lights and the girls I would get the perfect shot I was looking for. Sure enough with enough patience and a watchful eye, I got it! I just love seeing the girls face, her two friends being both lighted and backlighted at the same time.

Went to a New York Mets game this week and tried out a really cool app called Frameographer that allows you to easily shoot both stop motion and time lapse on your iPhone. It’s made by Studio Neat which also sells a great holder for your iPhone for almost any tripod called the Glif. The Glif works great on either a full scale tripod or on the little Joby tripods. See the time lapse video of the grounds crew getting the infield ready before the game at Citi Field. Again I used my iPhone using Frameographer and just resting the iPhone against the railing in front of our seats. Next, I’m waiting for a wedding at the church across the street and try the time lapse again….should be fun.

Just Because: Pete Townshed and Jack White doing the classic Who song, “the Seeker” in 2006.

This entry was posted in iStuff, On Location, Video Velvetta. Bookmark the permalink.